MPLS stands for ‘multiprotocol label switching’; it’s a technique that can be used to ensure you’re making the most of your available bandwidth, and not ‘wasting’ bandwidth on unnecessary tasks. There’s a lot of technical and in depth information around detailing what it is and how it works, but right now let’s strip everything back to basics and take a look at the simplest MPLS explanation.

You drive up to the car park of a large shopping centre you’ve never visited before. There’s not only multiple entrances, but there’s also many different ways to get from where you are now to the shop that you want to go to. At each fork in the path that you come to, you need to check the signs and make a decision about which way to go in order to get to your destination in the quickest way.

Data does the same on an ip network. Data has a known final destination but it has no known route. Instead, it does what we would do in an unknown shopping centre; it reads the signs at every fork it comes to.

This slows the data down, meaning that you’re not getting the most from your available bandwidth. This is where MPLS can help; it essentially acts as a built-in map for data, reading the types of traffic and directing using label switched paths lsps.

Why is MPLS used?

Multiprotocol Label Switching is a protocol routing technique used to transfer packets of data. MPLS Networks add labels to data when it passes through, the labels can also be changed or taken away completely. The labels are there to make sure the data goes where it needs to.

This technique makes sure that digital packets reach its destination as quickly and efficiently as possible. MPLS labelled Data was created in the 90’s to allow for more efficient data transfer & traffic flows compared to the traditional IP routing.

We use MPLS for various reason such as:

How does it work?

MPLS changes routed network to something like a switched network. It’s a lot faster compared to the traditional Internet Protocol (IP) routing, hence the popularity. Instead of forwarding data packets on a hop-by-hop basis the data paths are founded for source destination pairs. The paths that are created in MPLS are called label-switched paths (LSP).

It works by having an Ingress route at the beginning of a label-switched path, each LSP can only have one ingress router. IP packets are masked with an MPLS Network Layer 2 frame by the Ingress router (label switch router), that IP packet is then sent to the next router in the path using a mode ATM. 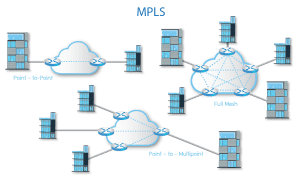 What is the difference between WAN & MPLS?

WAN and MPLS are two completely different things, MPLS is a protocol you use on a network. WAN stands for Wide area network, it’s just a way of letting your sites communicate.

There’re many ways of connecting your sites, one of the main ways in via a Point to Point Leased Line. MPLS is a protocol that controls the routing of data to allow for the most quick and efficient data transfers.

An MPLS can be used in conjunction with a WAN. An MPLS WAN (Network Protocols) is used to connect multiple office all around the world. When WAN and MPLS are utilised together it allows efficient data transmission to all your sites. Scalability is also another factor, you can deploy MPLS WAN to over 1000 sites if needed, brilliant for global businesses.

MPLS WAN allow businesses to give control of routing to the service provider they are with. This subsequently mean less WAN engineers are need within your business, saving money. It also allows you to effortlessly transfer any type of data. This WAN connectivity is considered one of the best compare to Ethernet WAN etc.

It is undecided if SD WAN will replace MPLS. SD WAN is an overlay service whereas MPLS is an underlay service. So, to compare them is slightly unfair as they are completely different services.

Having said that, both technologies have its own set of pros and cons, after listing them you can decide which service is best for you.