Business Broadband – Where its heading…

In the past, solutions such as dial-up and ADSL were all the rage, but things have moved forward dramatically since then, with the likes of FTTC and FTTP coming into the mix. Although the UK broadband situation isn’t perfect, more and more businesses are able to access fibre broadband, with more availability to appear over the coming years.

One thing that the government is doing to encourage companies to make the move to full-fibre is introducing the Gigabit Government Voucher Scheme. This scheme will give companies a grant of up £2,500 towards the cost of a Leased line, but there are a few requirements you’d need to meet first, such as being a UK based business and having a line consisting of 100MB upwards. 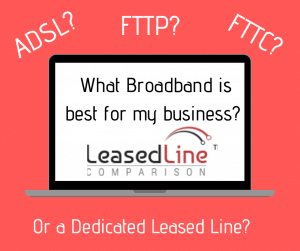 According to Ofcom, around 94% of UK businesses and one can now access superfast broadband, compared to a mere 56% back in 2016. This coverage is still rising year by year, soon 100% of the UK will have access to Superfast broadband, but when is the question that hasn’t been answered as of yet.

Even with this high percentage, many companies are still left to deal with the brunt of slow and unreliable broadband, one solution for this is a Leased line. Leased lines are a full fibre connection that runs from the exchange point directly to your premises. Boasting many benefits such as guaranteed and uncontended speeds etc.

Here are some examples of business broadband solutions that might be available in your area:

This is the most basic form of broadband connection, it uses all copper, hence the lows speeds and even lower price. Copper wires come from the exchange point to your local roadside cabinet, then another copper wire runs to your premises.

This business broadband package will normally come with line rental included. The max speed of this solution is around 24Mb, but this isn’t always guaranteed, so you could be left with dismal speeds. In terms of price, ADSL starts from around £18 per month (depending on provider).

Fibre to the cabinet (FTTC) is the next internet up from the standard ADSL line. The way it works is simple, a fibre line goes directly from the exchange point to your local roadside cabinet, and then from there, a copper line runs to your premises. Normally a phone line is included in the package.

This solution is more widely available compared to its superior FTTP and is often a popular alternative. It can offer broadband speeds of up to 80Mb at the reasonable price of around £40 per month (prices exclude VAT). These speeds will not meet the mark for data-heavy businesses, this solution is more so catered towards home broadband users rather than businesses, so if FTTP isn’t available then the next alternative is a fibre Leased line.

Fibre to the premises (FTTP) is the best business broadband service you can get on today’s market, it offers speeds of up to 1GB in some locations. Like all broadband Wi-Fi services, unfortunately, speed isn’t guaranteed as it is a shared line, so peak times and contention ratio will most likely be an issue. Due to the speed increase and the use of full-fibre FTTP is slightly pricier compared to FTTC, starting from around £60 per month (depending on provider).

Fibre to the Premises on Demand (FTTPoD) is a relatively new service that allows customers to access Generic Ethernet Access (GEA) over Fibre to the Premises. It allows users in FTTC serviced areas to feel the full force of FTTP, with speeds up to 1GB.

Openreach will survey your area, plan, and build the FTTP network directly to your premises. It can be quite pricy though, install charges and planning and design charges can add up to over £100, at this point it might be more cost-effective and beneficial to opt for a Leased Line.

Ethernet First Mile (EFM) is technically not a broadband service as it has symmetrical and guaranteed speeds, but it’s often a sort after solution for companies looking for a stable connection but can’t afford Leased lines/can’t get FTTP in their area.

EFM works but utilising copper pairs, the pairs will run from the exchange point to your local roadside cabinet, and then it travels directly to your premises. As this is a full copper service, max speeds are around 35Mb, which can be sufficient for low data usage companies, but not for high data usage companies. The higher the speed you need, the more pairs needed in the circuit, therefore, the higher the price.

An EFM connection starts from around £120 per month, but this will depend on the distance you are from the exchange/cabinet and how many pairs are in the circuit. The install times for EFM is around 45 working days, but this can change depending on if any problems incur.

Contract lengths for EFM are either 12 months or 3 years, with 12 month contracts you’ll have to pay an install charge though.

Recently, the Federation of Small Businesses (FSB) was asked to throw in their two cents and share their thoughts on how business broadband accessibility issues would be addressed in the future. The answer was somewhat surprising, with the FSB’s Senior Policy Leader Will Black placing his bets on satellite broadband.

Why satellite? Because it doesn’t require the presence of physical lines, which has long been cited as one of the major obstacles affecting the expansion of superfast services, particularly to a business located in the more rural areas of the country. While satellite internet does indeed have its place (in-flight connections, for example), it has too high a latency for it to really be beneficial to businesses.

How about Leased Lines?

Somewhat surprisingly, Black dismissed leased lines due to lengthy installation times, claiming that ‘any delays to the installation of broadband or leased line can have really detrimental effects on business’. He’s certainly not wrong, but if we’re looking at the future of business broadband, it’s important to take into account recent changes to regulation that have been implemented that would render concerns such as this obsolete in within just a short space of time.

Ofcom has, of course, very publically shared details of their plans to reduce leased line installation time to 46 days (from a 48-day average) by March 2017 and to reduce this time further to just 40 days by 2018. Leased lines don’t seem so bad now, huh?

The other benefits of Leased lines are that it’s an uncontended service, internet access is unlimited, speed is guaranteed, you’ll get a static IP address as standard, and 24hour customer service phone numbers with a 5 hour fix time (depending on provider).

Right now, to consider anything but a leased line to be the future of business broadband is a little irresponsible. Of course, with ever-advancing technology, newer services could provide an even better solution in the future, but for now, leased lines are ‘it’.