Recent years have given up some great advancements for broadband speeds in the UK. The government scheme has helped more fibre be installed throughout the country and the average download speed is now 54.2Mbps, which is a good increase compared to 5 years ago where it was just 22.8Mbps.

This is largely due to the amount of fibre optic broadband connections in place and I would expect it to increase more over the next few years too. As a nation we are using and relying on the internet more than ever before& businesses are no exception to this.

Epos till systems, VoIP phones, video conferencing, CRM system, cloud storage are all integral part of many business operations and all require a stable and reliable internet connection to run effectively. Leased Lines have been a solution for years, but with the increased availability of fibre broadband services the speeds you can get on broadband now can be up to a staggering 1gb!

While this does, of course, come as great news to many businesses who may have been struggling with slow broadand speeds, for some this still isn’t the solution they’ve been looking for. Even with a 100Mbps broadband connection, there are still a few lingering concerns: 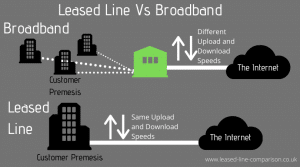 This includes potential downtime due to factors beyond your control, and bandwidth sharing across multiple users and even multiple companies, which can cause down time, buffering and mean you get a speed much less than the expected 100Mb fibre package.

With 100Mb Leased Line you get service level agreement which guarantees your speed, so if you choose a 100Mb line & you don’t get that you earn money back. You would also get a QoS (quality of service) on leased lines which you won’t get on any broadband deals.

Broadband is often seen as a cost effective way for businesses to get internet access. It can be if you don’t need to use or rely on the internet. Leased line costs are a bit higher on the monthly rental but when you work out how much time you loose on a broadband connection they can actually save you money by having an Ethernet circuit.

During the past few months, Ofcom have been on a mission to educate businesses about the ‘speed gap’; the discrepancies that occur between an internet service provider’s advertised speeds, and the speeds that will actually be received at the premises.

A 100Mbps broadband connection means that the line is capable of carrying 100Mbps, and may not be indicative of the actual speed of your connection. Your download speeds will often be much worse than your upload too, which can be a real problem for businesses who send files or have to use cloud based applications.

A further concern is latency. Latency refers to the delay between a command being given, and a response being received, with lower latency being preferred. A 100Mbps fibre broadband connection may have relatively high latency, which can cause problems for some industries.

Broadband services that offer high bandwidth but have high latency will make users feel like they are on a slow line. Combine poor latency with the broadband line being shared and dropping out at peak times of the day, a 100Mb leased line in comparison can feel around 20 times faster to the end user.

However some FTTC broadband connections are now offer a 24 month broadband package now as standard & if you get a FTTPoD broadband you will likely have a 36 month contract as standard, as well as some hefty instalation costs. Leased Lines don’t come with install costs unless ECC’s are identified after the site survey is performed. Its rare but should this ever occur you have the right to cancel your contract.

A 100Mb broadband connection is very good, and should theoretically suit most businesses, even those with greater needs, but the above concerns do make the reality of this less exciting that it seems. Although there is technically little difference between a 100Mb broadband and a 100Mb Leased Line connection, there is a significant difference when you compare the realities of 100Mbps fibre broadband to a fast, guaranteed 100Mb leased line.

A 100Mb leased line provides exactly what it says: 100Mbps down, and 100Mbps up stable and secure internet connection. As this is a dedicated connection between a business and the leased line ISP, there is no bandwidth sharing, unmatched uptime, and ultra low latency suitable for any industry or sector. So while a 22Mbps difference may not seem much, when you delve deeper a 100Mb leased line is the clear winner.

Business Broadband support has a poor reputation when compared to leased line support. Leased Lines are pro-actively monitored 24/7 by the provider. Often you can get through to support on their phone line within minutes, even on weekend calls.

This enables them to fix any faults before they arise and it comes with the Service Level Agreement which is a guarantee that the line will be “always-on” and should anything ocur there will be fix time targets, typically 4-6 hours.

As for broadband the support is much more reactive & although they will always try to resolve faults quickly there are no timescales for this. We have known customers who have been without a connection for weeks on end waiting for a fault to be fixed. If these businesses have no back up in place this can be detrimental to their operation.

How much does 100Mb Leased Line Cost?

The main factor that has prohibited companies from being on a leased line usually comes down to the price. Years ago 100Mb leased lines could be between £800-£1000 per month! However, thankfully leased line prices have dropped significantly and many businesses can also save up £2500 off any install costs at the moment with the government voucher scheme.

The cost of a leased line will always depend on where you are located and what provider you have had quotes from. Virgin Media, BT & TalkTalk are the three main providers of fibre but they each have hundreds of re-sellers. These re-sellers by at a wholesale price which is usually discounted based on amount of business they do.

These providers often give a better service, the same product but up to 45% cheaper than a direct quote would be. Its a no-brainer to consider them if you are looking at leased line quotes.

The average price of 100Mb Leased line is usually between £180 – £400 per month for most companies. What many business owners don’t realise is the telecoms industry is pretty open for negotiation when it comes to price. In our years comparing prices for leased lines we have learnt some great tips that can help you get the best leased line costs.

How much does 100Mb broadband cost?

To actually get 100Mb broadband you probably need to look at a 300Mb+ fibre broadband options or Fibre to the premises/on demand (FTTP/FTTPod). Depending on the options available at your location, providers special offers and length of contract will depend on your costs.

For th 300Mb + broadband which will hopefully give you the actual speeds of 100Mb prices are generally between £35 a month and £90 a month. This will depend on providers in your area and the time you buy. If you are not in a rush its worth keeping an eye on Virgins offers, which can be very competitive. Alternatively, run a business broadband comparison to see the whole market.

Should you choose FTTPod this will give you better speeds and a lower contention ratio which means more stability. It also comes with a high install cost in most cases and you are then looking at a 36 month contract. This is usually available if your local cabinet is not FTTC enabled. Some people find because of the costs associated its often worth considering a leased line to get a better service.

Is an Internet speed of 100Mbps considered fast?

In short – yes 100Mb is considered more than enough for home internet users, even multi-device households will cope easily. When it comes to speed for businesses its not quite as simple to figure out whats bandwidth is enough as it will depend on a number of factors:

What speed Leased Line do I need?

The speed you need depends on your own requirements and locations which we would be happy to help you work out. Typically speeds range from 10Mb – 10Gb. Leased Lines used to start at 2Mb but those low speed options have been phased out due to the need for speed increasing. The most common speed for the average business is anything up to 100Mb.
Data heavy users will often require 1gb or more which is particularly common in certain industries like fintech companies, architects and digital engineers.The chances are you would know if your businesses needed a particularly high bandwidth & likely have an IT team in place to advise and manage it.
The benefit of any lines under 100Mb is they would be delivered on 100Mb bearer. For Example if you bought a 50Mb leased line and in a years time your business had grown and you needed more you should have the options to increase your bandwidth from 50Mb to 100Mb & only have to pay the additional monthly cost, if applicable.

It should come as no shock that the connection thats best for your business can’t be decided through reading. Its about working out what you need & what your budget allows – buying cheap does not always mean saving money. If the broadband goes down once a month and you loose more than £200 in lost sales/wages etc – it would often be cheaper to have a leased line.
The best advice is to compare leased line quotes and business broadband prices to help make your decision on your connectivity.
Previous StoryThe Future of Business Broadband
Next StoryBusiness Internet: Can it be Cheap AND Good?