BT introduced what they described as an ‘alternative’ to their existing BT Net leased lines; fiber-to-the-premises (FTTP). Its specifically designed to meet the needs of small and medium sized enterprises in the UK. However, while it is certainly good news that providers look to be expanding the range of products available for businesses, we need to be asking one very important question here: is BT’s new FTTP service for SMEs a suitable alternative to a dedicated leased line?

To answer this question, we need to consider two separate aspects: the differences between BT FTTP and BT Net leased lines, and the ways in which BT is opting to introduce and roll out these services.

Its also important to note that FTTP is not the same as Fibre to the cabinet (FTTC), despite their names causing confusion. FTTC will give you better broadband speeds than your traditional ADSL broadband and is often behind the super-fast fibre broadband packages you see advertised. We will compare the two services later in the page.

Straight away, we can see that there are a great deal of differences between BT Net leased line services and the new BT FTTP service for SMEs, so the BT marketing team may be pushing things slightly by claiming that FTTP is an ‘alternative’; they’re very much two different products. Here are just a few of the differences:

● Managed vs. unmanaged internet service – A Managed service ensures providers monitor the network to minimise the amount of downtime you receive. Leased Lines are managed, whereas FTTP is not, meaning Leased Lines are considered the more stable of the two.

● Symmetrical Speeds – Fibre to the premises (FTTP) connection is not symmetrical, significantly favouring download. Ethernet Leased Lines give you the same speeds for upload and download no matter the time of day or how many people are using.

● Contention – FTTP is a shared service, usually shared less than traditional ADSL but the contention ration is usually around 20:1. Leased Lines are shared with no one giving you 1:1 contention. This makes a big impact at peak times with stability of the line. 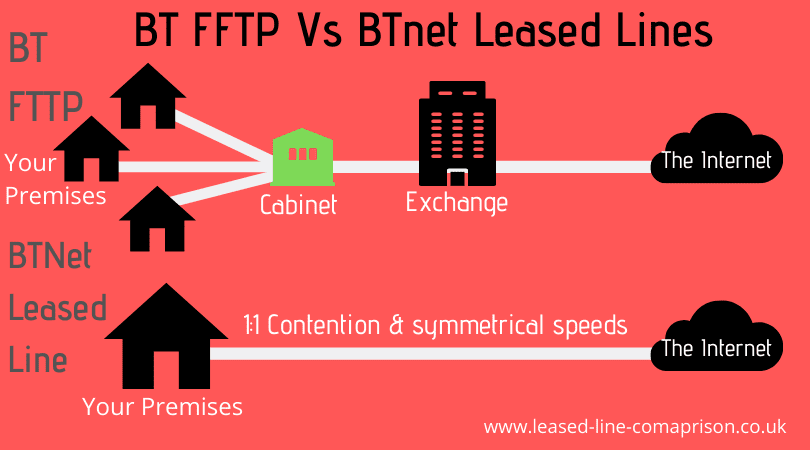 Whilest both FTTP (or FTTH as its sometimes known) and FTTC use fibre optic cables to deliver data via the internet. This results in faster speeds than tradition copper phone line based connections, especially for customers further away from exchange level.

However, they still have differences that can have a huge impact on a business:

● Speed – The biggest difference users will notice is the speeds. BT FTTC goes up to around 76Mb at the best areas, whereas BT FTTP can get top speeds of 330Mb. These are not always the speeds you will actually receive though – the only business connection with guaranteed speeds is a fibre leased line.

● Copper/Fibre – FTTC uses some fibre so gave a decent increase in speed compared to ADSL, which is what we were all used to before FTTC came out. The fibre runs to the cabinet then it utilises copper to your location. Leased lines use fibre the entire way, which means your speeds stay what you pay for.

●Availability – FTTC is available much more than FTTP in the UK. Most providers aim FTTP towards businesses rather than home users, although this is set to improve by March 2021.

Now to look at how BT are rolling out their service. One of the primary benefits of a BT Net leased line service is that’s available anywhere, which is why it’s a firm favourite of more rural businesses who do not have access to superfast broadband.

Interestingly, BT are choosing to focus on high street businesses located in major cities such as Bath, Bristol, London, and Liverpool for their initial stage of rollout; businesses that are likely to already have access to speeds that don’t necessarily hinder their potential. Once again, it’s the more rural businesses that are being overlooked, and that’s not changing.

There are websites which show fttp rollout dates, however we are relying on BT/openreach so take it with a pinch of salt.

In terms of being an ‘alternative’ to a BT Net leased line, BT’s new FTTP service for SMEs is not a sensible option. There are simply too many significant differences between the two products, and it could be argued that BT are actually misleading their customers by suggesting that they will receive a somewhat similar internet service. If you feel your business requires a BT Net leased line, then opt for a leased line.

On the other hand, it should be acknowledged that this new FTTP service isn’t a bad thing. The more options available to SMEs, the better, and FTTP certainly offers greater advantages than an old ADSL connection. It’s often quicker, more reliable, and has a much more favourable contention ratio. Should a business find that ADSL isn’t quite meeting their needs, but they feel that a full BT Net leased line would be a bit too much, BT’s new FTTP service for SMEs could be just the solution they’re looking for.

Previous StoryWhat is ‘Managed’ Internet & How much does it cost?
Next StoryLeased Lines Essential for voIP Communications