What is a WAN network?

A wide area network (WAN) is a network, usually used for connecting sites over a large geographical area, i.e. a computer network. It connects various Local Area Networks (LAN) connections together & allows you to communicate with any sites over long distances. Implementing a Wide Area Network is done in one of two ways.

You can either use a point to point to connect the sites in question or use a packet-switched network. Packet-Switched Networks make data into small data units called packets. You can share the data path between users by breaking the data into packets. WAN’S use Frame relay or X.25 to aid the transfer of data, among other ways.

Point to point WAN’s involve either a public-switched telephone network or a dedicated Leased Line. Larger companies will go for the Point to Point Wan rather than packet-switched networks as you can send larger amounts of data more efficiently.

The most commonly used connection on a WAN network is Fibre Leased Lines. They range in bandwidth from 10Mb to 10Gb and have a number of reasons they are the preferred connections for WAN networks :

What is a wide area network used for?

One of the best known examples of WAN is the internet – often considered the largest WAN in the world. Over the internet we transfer files from one PC to another using public networks. There are a number of protocols that can be used including FTP, HTTP and HTTPS protocols. 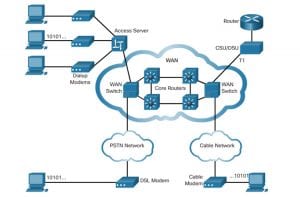 Everybody uses the internet, most of us do on a daily basis – you are probably connected to the internet right now reading this article. We all know the benefits of the world wide web – information at our fingertips, fast communication across the world & cat videos on youtube. However, if you are browsing without using a VPN you are more vulnerable to hackers & the dark side of the web.

A virtual private network stops that as makes the link between two networks secure so that the traffic is completely private, hence the name. It allows that private traffic to pass over another network which may be untrustworthy or unsecured. VPN’s are often used on WAN’s, but they are not exclusive to them as you can also set up a VPN on any other network like a LAN.

Difference between WAN and SD-WAN

SD WAN (software-defined wide area network) is a virtual WAN that allows companies to transport data over a combination of services. Such as MPLS, broadband internet, cloud services, and other network services. It works by using a centralised control to securely direct traffic across a WAN, offering a better quality of service. This increases performance which results in increased productivity, reduced IT costs, and better user experience.

Whereas WAN technology uses only one data sending service, SD WAN combines multiple. Some other differences are:

Advantages and Disadvantages of a wide area network (WAN)

WAN is a revolutionary type of data sending service. But as most things it does have disadvantages as well as advantages.

There are two key types of Wide area networks which include utilising wired or wireless technologies. Wired WAN networks are usually made up of MPLS, carrier ethernet and standard broadband internet linking. MPLS stands for multi-protocol label switching and refers to the IP routing configuration of the network.

Wireless WAN’s are less common but they generally use the same kind of data that you see on mobile devices like 4G, wi-fi or in some cases satellite. When it comes to commercial WAN’s the wireless options are far less common due to the reliability of them. However, with services like 5g coming in that could change in the future and make it more cost effective for businesses needing a wide area network.

There’re a few other types of networks associated with WAN, these are:

How to get the best deal on your network

The quickest and easiest way to secure the best deal on your network is to compare prices and negotiate with the network provider. If you have more than one site it puts you in a good position to try and reduce prices using economies of scale.

Compare Multi-site networks today by filling out our form.