What is a point to point network?

A Point to Point or P2P (Data link) provides a path from one fixed point to another. This will allow streamline communication links between two points. Local Point-to-point networks consist of two nodes connected by the internet & is usually delivered on a dedicated leased line.

Options also include MPLS networks (Layer 2 circuit). This is a point-to-point Layer 2 connection that transports traffic by MPLS or another tunneling technology on the ISP’s network.

Project managers or network engineers make diagrams using network diagram software or a network diagram template. It gives a visual representation of a network, showing various components and how they interact which can include routers,hubs,firewalls.

This aids setting up the network & helps ensure the types of networks have the correct network devices, enabling a successful set up. 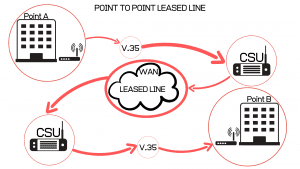 The types of topology in Point to point networks

A P2P network uses different types of topology to connect two internet nodes via an internet connection. The nodes will then transfer data to each other via a full fibre line.

A few small-scale examples of this are a two PC’s communicating via modems, a PC communicating with a printer via a cable etc. In conclusion, Point to Point just means transferring data from one point to another.

There are other network topologies’ including:

What are the advantages and disadvantages of a point to point network?

Some of the benefits your business get as a result of a P2P network include:

On the other hand, the disadvantages can be:

The difference between point to point and multi-point line configuration

The channel capacity can be shared temporarily by every point connecting to the line. If points are using the line turn by turn, then it is a time-shared line configuration. Whereas, with a point to point a connection is made between two points via a line. Also, where the capacity is shared in a multipoint line, it isn’t shared in a point to point line.

The other differences are:

Getting a point to point leased line.

Point to point leased lines will be provided by most Leased Line providers. There are also a few factors you’d need to consider before getting a point to point installed. The first thing is to figure out what sites you need to connect and how far away they are from each other, the distance will affect the price.

The good news for businesses working to a strict budget is point to point Ethernet leased lines are often more budget-friendly than a standard leased line. The costs start from as little as £150pcm but will depend on your requirements.

The distance between the two sites, bandwidth and location all impact the price. To find what a point to point network will cost get a quote. We have been comparing point to point leased lines for over 10 years and are confident we could get you the best price.