With fibre optic connections becoming increasingly more common around the UK, you may be considering taking advantage of the superfast speeds and other benefits that Fibre can offer. For businesses looking at fibre options, the main two to consider are fibre broadband and fibre leased lines. So, what’s the difference?

The most noticeable difference is the price & speeds available. When looking at business broadband the upload and download speeds vary based on location & provider so we have used the best case examples to give you an idea, however, its important to note it’s very unlikely you will achieve those speeds.

Leased line speeds are guaranteed so whatever bandwidth you sign up for is what you will receive through the duration of your contract. We have created two tables to give you some examples of broadband and leased line speeds below.

Business can install fibre broadband using Fibre to the Cabinet or Fibre to the Premises technology. For businesses, it is more likely to be the latter, which links your premises directly to a local exchange. Fibre leased lines give you a dedicated connection to the local exchange, which means the connection is not shared with any other users, unlike broadband.

Therefore, your connection won’t become slower at peak times as leased line speeds remain consistent – it is solely for your use. Furthermore, leased lines are symmetrical whereas broadband is asymmetrical.

What’s the difference between leased lines and broadband?

Aside from the obvious speed and price differences, there are also a number of other notable differences between the two. All of which can have a big impact on your business which is why so many UK companies choose a leased line for their connectivity needs. 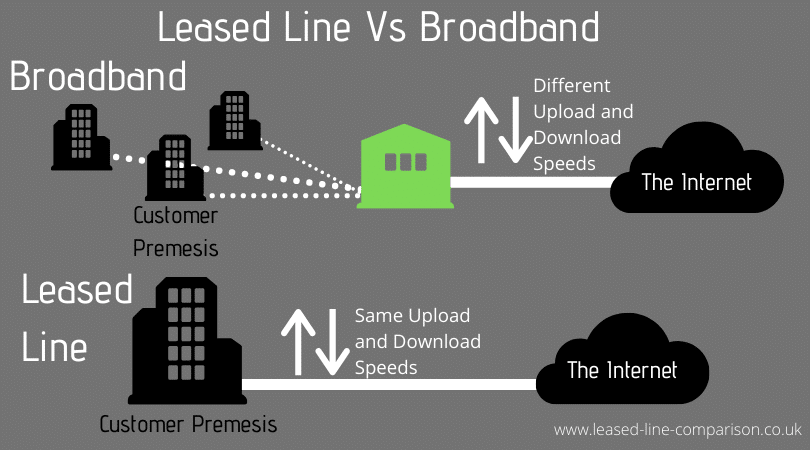 Are Leased Lines better than broadband?

For most businesses – Yes Leased Lines would be better for them than a shared broadband connection. However, when choosing the right connectivity there are a lot of factors that come into what decision you should make like :

Leased Line Speeds are faster and more reliable than broadband options. Full Fibre broadband (FTTP) is the fastest broadband solution out there, offering speeds of up to 1GB download, although its unlikely many will get that. Both speeds are affected by the distance from the exchange: the further you are away from the exchange, the slower your connection. But Fibre leased lines can offer 1Gb anywhere in the UK.

With Fibre leased lines, 10Gb is capable to those within 35km of an exchange, but it drops the further you are away. This is similar to broadband: those within 500m of an exchange will experience the 100Mb advertised, but those in remote areas might not see such as significant improvement.

You may be thinking that leased line speeds must come at a cost: and you are right. Leased lines are rented annually and require payment on a monthly basis; they can cost up to several hundred pounds. Fibre broadband is a much cheaper alternative, monthly fees will be more like tens of pounds.

If you are considering leased lines and have an ISDN30 connection, you may be able to save some money. Fibre leased lines utilise SIP trunks, which are virtual telephone lines delivered over a leased line connection. This means that you can get rid of ISDN30 channels and deliver calls over the SIP trunk, saving a significant amount of money on your business phone system.

With fibre leased lines costing more the main thing to consider is just how mission-critical is to your business. Businesses and organisations that place paramount importance on their internet connection will pay the premium for dedicated fibre and the leased line speeds available.

The unmatched download and upload capabilities and reliability of the service can make it a cost-effective solution in the long run. Fibre broadband still earns its moniker of ‘superfast’ and has a number of benefits. It’s also a great broadband option for businesses that do need superfast download and upload capabilities and a reliable connection. In the end, it is up to the user to weigh up which connection suits them best.

Business broadband speeds, and how they’re advertised, have been a hot topic over the last few years. However, the Advertising Standards Agency have stepped in to bring order to the debate. The main concern with business broadband speeds is that it’s difficult for internet service providers to give exact figures.

In fact, the only way to achieve a guaranteed speed is with a leased line. This is dedicated to a single business and therefore unaffected by time, number of users, contention, and so on. With business broadband, there are many different factors that could affect the speed received.

The problem is that the discrepancies between advertised speeds and actual speeds received are causing confusion amongst both business and domestic users, with studies finding that an understanding of broadband speeds in the UK is typically ‘low overall’, according to market research company GfK.

Businesses who require fast speeds, but do not want to commit to a leased line, are very obviously being drawn in by attractive advertised speeds, which are key for a ‘significant proportion of consumers’, according to Advertising Standards Authority (ASA) Chief Executive Guy Parker. Unfortunately, these advertised speeds are not the actual speeds they receive due to factors such as bandwidth contention.

Is It legal for ISP’s to provide less than the advertised speeds?

Believe it or not, internet service providers (ISPs) who are unable to offer advertised speeds to all their customers are not breaking any laws. According to current regulation, an ISP is only legally required to provide advertised speeds to 10% of their client base and can advertise these speeds as long as they include the words ‘up to’ before the speed figure. That’s why the ASA is now stepping in.

The ASA says that ‘speed claims in ads contribute to consumers’ expectations of the broadband speeds they’ll receive, but their expectations are not being met’, and are expected to announce changes to the advertising regulations early next year, confirming that the overall situation ‘needs to change’.

Currently, the only way for a business to be 100% sure of the speeds it will receive is through the installation of a dedicated fibre leased line. This is because leased line speeds will never be less than what was originally contracted – If you signed up for 100Mb you will always receive 100Mb.

An exclusive network connecting the ISP with the business directly over leased lines, a leased line connection removes common speed obstacles, such as bandwidth sharing across multiple sites, peak usage times, and overall contention ratio. As the cost of leased lines is continuing to fall, many businesses are now finding that a leased line is the most suitable choice.

Previous StoryThe ISDN Switch Off: How Will it Affect Your Business?
Next StoryDark Fibre: Boosting the Economy?