Symmetric digital subscriber lines are different to ADSL. The main difference between the two: symmetry. SDSL gives you symmetrical upload and download speeds, much like the business class leased line, only less reliable.

Whats is the difference between SDSL & ADSL?

The two types of DSL that are common in the UK: ADSL, and SDSL. ADSL is what you’re used to. It has faster download data rates and the bandwidth degrades over distance. Take a look at most BT business broadband – download speeds of 17 Mbps, and upload speeds of just 1Mbps.

Understandably those speeds are not ideal for businesses. It means that if you’re using technologies that require a lot of upstream data, like video calls, you’re going to struggle along the way.

SDSL is different from standard broadband connections. It guarantees that you’ll receive the same upload speeds as download speeds. The other business-grade connectivity that offers this symmetry is an Ethernet leased line.

SDSL will not provide the same high speeds as leased line, but because it’s delivered over pairs of copper wires, instead of fibre, you won’t pay as much. This makes it a better option for smaller businesses with limited connectivity budgets.

You may have heard this term also floating around on the internet, it simply means Single-Pair High-Speed Digital Subscriber Line. You may be thinking, how is this different from SDSL? Well, it isn’t, as such.

It the same technology but SHDSL can just deliver faster speeds. It’s just a different name for the same thing, like how Leased lines can also be called dedicated ethernet lines, but they are still the same thing.

The types of DSL technologies

DSL simply means “Digital Subscriber Line”, these are types of technology that run on existing copper telephone wires. There are 6 main types of DSL, these include, HDSL, ADSL, ADSL2, SDSL, VDSL, and VDSL2. Below I’m going to explain each one:

HDSL stands for “high-bit-rate digital subscriber line”, it used copper pairs and is a symmetrical line. It’s one of the most popular and earliest forms of DSL. It can carry upload speeds of up to 2.048mbps in Europe and up to 1.544mpbs in America.

ADSL2 stands for “Asymmetric digital subscriber line 2”, it is essentially the same as ADSL, but can offer higher speeds. Its consists of download speeds of 24Mbps and upload speeds of 8Mbps, this is depended on the provider, peak times, and contention ratio.

SDSL stands for “Symmetric Digital Subscriber Line”, again, like all DSL technologies, it uses copper wires to delivers a symmetrical internet connection. Symmetrical meaning the upload speed is the same as the download speed. The max speed you can achieve on this line is 3Mbps up and down.

VDSL stands for “very-high-bit-rate digital subscriber line”, along with the HDSL, its one of the most popular form of DSL due to the higher speed it can deliver. VSDL can reach speeds of 52Mbps download and 16Mbps upload. It, again, uses copper telephone wires.

VDSL2 stands for “very-high-bit-rate digital subscriber line 2″, it’s essentially the same as a VDSL but can deliver higher speeds and like VDSL it also uses existing copper telephone lines. VDSL2 allows speeds of up to 80Mbps, which is considerably more than it’s inferior VDSL. 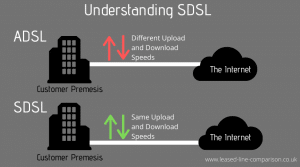 Availability in the UK

Are you ready to be impressed? Well, I’m going to use my mind-reading powers to tell you what you’re thinking right now. ‘The advantages of a leased line, for a fraction of the cost? Sign me up’. We wish we could, but things aren’t quite as simple as that.

It’s not always a fraction of the cost & It’s reported that SDSL is available in less than 20 percent of the country. This hasn’t been helped by BT retiring their SDSL service back in 2004 to focus on ethernet in the first mile (EFM). However, there are still some providers offering it.

The majority of UK providers & businesses have moved away from single pair SDSL and DSL connectivity in general due to the increase of fibre availability. Fibre is a more robust, reliable and faster connection than copper & doesn’t degrade over distance.

The cost of SDSL starts from £150 per month so they are similar to leased line costs anyway. When SDSL was first available and the business world was introduced to a lower-cost internet that can give you symmetrical uploads and downloads – it was seen as a groundbreaking technology.

However, it’s 2019 & the cost of leased lines have fallen dramatically since then. DSL connections with the same upstream and downstream data often have lower speeds than a leased line which makes running things like online voice services less reliable. The speed also reduces over distance so if you are further away from the providers pop you will get a lower bandwidth internet connection.

SDSL was a proprietary technology when it first entered the market. Especially as it was seen as a better asymmetric digital subscriber line ADSL technologies replacement. In 2019 it’s on its way to becoming a legacy service with less people using it than before. Technology moves at such a quick rate & the reduction of leased line costs and lack of availability has seen more businesses move to their own dedicated fibre line.

If you are considering SDSL we would love to help assess you options & compare all types of business broadband & connectivity.