What is a leased Line?

To find out we can just type our search term into Wikipedia, but let’s be honest here – sometimes we leave Wikipedia a little – or even a lot – more confused than when we went in.

Let’s use the example of leased lines. If you type ‘leased line’ into Wikipedia, here’s the first sentence:

“A leased line is a private bidirectional or symmetric telecommunications line between two or more locations provided in exchange for a monthly rent”.

While this sort of thing will cause some people’s ears to perk up like a dog that just heard the word ‘walk’, for the majority of us, it doesn’t really mean much, and it doesn’t really leave us feeling any more clear about what a leased line really is. 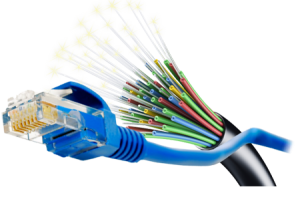 The Wikipedia definition of a leased line isn’t wrong, but it’s just not described in a way that’s particularly accessible. A leased line bypasses the traditional ADSL way of getting an internet connection through traditional telephone lines. So let’s pick out a few key phrases and examine them in a little more detail.

The ones you may hear the most include Private, Dedicated, Symmetrical, Stable & Reliable.

A leased line is a ‘private’ connection, either between two or more of your offices or between your office and your telecommunications provider.  If you’ve ever noticed that your business broadband is running slowly during peak times, the reason is that other businesses are all competing for bandwidth.

You may notice this more when you are at home using broadband, especially around 6-8pm & at weekends when people are at home more. The contention is often what causes buffering when you watch your favourite netflix show or browse social media

Business broadband isn’t a private connection, it’s shared with others and you’ll have a ‘contention ratio’, which is usually around 20:1 for business customers. This means you’ll be sharing your bandwidth with 19 other users. A Leased line is a dedicated & private connection, it’s uncontended. You get to keep all the bandwidth for yourself – no sharing necessary for a fixed monthly fee.

When you’re browsing through business broadband offers, what do you pay attention to? Download speed is hugely important – it’s what makes sure we’re not stuck watching jumpy, buffering content or causing you staff to have an excuse to do nothing.

Upload speeds are important for some businesses more than others. If you need to upload data in the cloud for example of CAD drawings are a particularly data-heavy file that architects and engineers often need to use and upload to a system. These need to be uploaded quickly and easily & can be a real struggle if your upload speed is low or unstable.

The other important thing about leased lines symmetrical speeds is they are guaranteed and don’t fluctuate during peak times. You get exactly the speed you pay for and the best thing? If it drops providers will start paying you. This is down to the SLA or service level agreement that leased lines come with.

All Leased line providers will have an SLA (Service Level Agreement) in place. An SLA will consist of terms that need to be met within the contract length. These terms include guaranteed speed, a set fix time (normally around 5 hours, but will depend on the provider), no downtime etc.

Each provider aims to reach 99.99% SLA, some say that they can reach 100% but that is virtually impossible. If a provider doesn’t reach these terms to a satisfactory standard, for example, decrease in speed, then you might be able to claim compensation.

If you’ve been paying attention, you’ve probably noticed something that seems a little strange: the Wikipedia definition of leased lines says ‘telecommunications’, rather than ‘internet’. The reason for this is leased lines aren’t just for internet.

Don’t get us wrong – when someone mentions a leased line they’re usually talking about their internet connection, but a leased line can also be used to carry most types of data, including phone line data and VPN data, too. They’re a pretty solid all-rounder, and they’re also remarkably flexible. Say you choose to have a 100Mb leased line installed for your business.

As you can see, leased lines really aren’t as complicated as some definitions make them out to be. In a nutshell, they’re just dedicated, private connections that can be used however you want. Many businesses use them to make sure they’re getting the best speeds from their provider, and others use them to create a speedy connection between multiple offices to help keep things running smoothly.

What shocks many businesses is that they find leased lines pretty familiar. They’re really no different to use than your standard business broadband, but they are much more effective for streamlining processes and boosting productivity because they are faster and more reliable. You can learn more about the benefits of leased lines in another of the Leased Line Comparison library’s ‘Top Ten Reads’.

Previous StoryWhat Exactly is VoIP’? (And Why is it Written Like That?)
Next StoryWhat is SDSL? The Easy to understand guide