VoIP is a term that’s being thrown around everywhere right now, and sometimes it’s easier to just nod your head in agreement than admit you have no idea what internet based VoIP is, isn’t it? That’s OK. On the surface, VoIP seems a bit weird; partly because it sounds funny to say, and partly because some of the letters are lowercase, and some are uppercase, but things will all fall into place once you learn a little more.

So, let’s start with the basics. VoIP stands for ‘voice over IP’, and it does exactly what it says on the tin. It’s voice data that are carried over your IP from your computer to your friend’s computers. When we were younger, this voice data would be carried over telephone lines when we picked up the handset and dialled, and this is really no different, except the data is carried over the internet, instead. Simple.

In terms of the lowercase/uppercase thing, the ‘IP’ part of VoIP is capitalised because IP itself is capitalised. IP stands for internet protocol, and it just refers to the way in which data is moved between one computer and another. Although you may not have understood VoIP before, you’ve probably heard of it. Big companies like Skype, Avaya, and Cisco all create VoIP services for businesses around the world.

Advantages and Disadvantages of VoIP

Like all business products, there will be a set list of advantages and disadvantages. Below I’ll explain a few:

Cost- VoIP systems cost significantly less compared to traditional phone systems. This is because with VoIP you’re using existing hardware (internet connection) to run the products, rather than implementing a whole new system to run traditional phones off of (phone line). 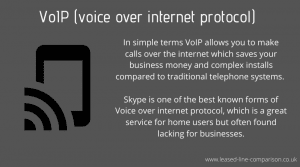 Portability- This section is more so applicable to softphones (broadband phones). As softphones are used on devices such as laptops and tablets, they can be used anywhere that has a sufficient internet connection. This is perfect for remote workers who travel here, there, and everywhere.

VoIP numbers are also virtual, so wherever you are, whether that’s in London or Toyko, you’ll be voice calling from the same VoIP telephone number.

Scalability- Another brilliant benefit of this communication service is that is can be scaled up easily, meaning less hassle for you as a business. For example, if you’re using softphones and you have an influx of employees, you just need to buy extra licenses and set them up on a compatible device and they’re ready to go.

IP telephony systems can have users from 1 to over 1000, so they can fit all sized businesses, growing or stagnated.

Call Quality- VoIP calls have extremely good call quality, as long as you have a decent connection. A lot of business will op for a technology called an internet Leased line when implementing VoIP phone service, this is because its the best internet connection you can get and it doesn’t drop out like broadband.

Relation connection to work efficiently- VoIP technologies, a lot of the time, will need an extremely reliable connection to work most efficiently. As mentioned above, the best connection to get is an internet Leased line, but some small business cannot budget for this time of connection. Don’t get me wrong, VoIP can work on broadband connections, up to a certain amount of users, but it will occasionally cut out due to peak times and latency.

Emergency Services- When calling the emergency services they can normally track where you are and send help. Unfortunately, internet telephony is unable to use location tracking. This is because calls come from an IP address with no GPS tracking enabled.

Why Your Business Needs VoIP

Again, lets just revisiting some of the reasons so many businesses are moving to VoIP. So what’s the big deal with VoIP, and why are businesses being urged to use it? There’s a ton of reasons why VoIP subscriptions are growing, such as:

You’ll know yourself that if you’re searching for the best price for something on the internet, you might look at international websites, too, to get the best deal. Global eCommerce has been a major focus over the past few years, and our business contracts are no longer restricted to the British Isles. We’re finding that we’re conducting more and more business on an international basis, so reducing the cost of call abroad is essential. Reports show that business can save 90% on international calls using VoIP.

How many times have you gotten yourself into a bad mood after reading someone’s email and thinking they’ve been a bit harsh, or a bit cold? We’ve all done it, but remember this: you can’t convey tone in the written word! Why else would emoticons have been invented? A real-time voice conversation can help reduce mixed messages, and gives you an opportunity to clear up any misunderstandings before ‘hanging up’. But of course we don’t want to use the phone for that; phones are so last year.

An office desk? What’s that? More and more of us are working on a more flexible basis these days. No longer are we confined to our desks (hurrah!), and instead we may be able to work from home, from a different office, or even from Starbucks with a cookie crumble frap and a giant chocolate chip cookie We’re not always in the same place as our work phones, and that’s OK! You can log into your VoIP phone from anywhere with an internet connection, so you can be ‘always on’ so you never miss a call.