We often hear about the benefits of leased lines in the UK – how they’re faster, more reliable, more resilient, and so on when compared to an ADSL business connection. However, when we discuss the advantages these connections can bring, we tend to group the different types together as one. The term ‘leased line’, on its own, really doesn’t have much meaning. It’s more of an umbrella term.

When we talk about leased lines in the UK, we’re usually referring to one of two types of leased lines that are becoming increasingly popular all across the country. Ethernet leased lines give businesses faster speeds, greater flexibility, on generally ‘more’ from their internet connection than traditional DSL connections.

It will likely be referring to site-to-site data connectivity or site-to-network connectivity. The site to network is what most of our comparisons are for & include your standard ethernet leased line, EFM’s and wireless leased lines as the main options people use. 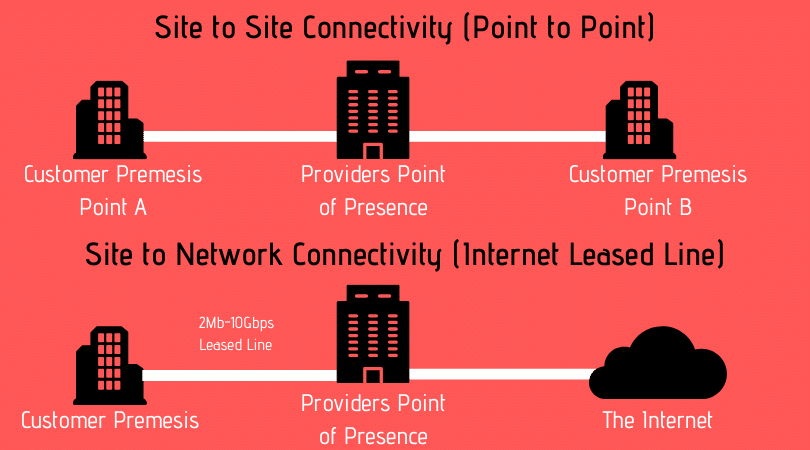 Site-to-site data connectivity, or a point-to-point leased line, is a high speed, reliable connection between two dedicated points. In many cases, this is between multiple premises belonging to the same parent company. So if you have an office in London & one in Manchester they could be connected via a point to point leased line.

Essentially, the two offices should share information in the same way as two computers on the same network would. It’s like having a network cable that stretches all the way from one office to the other. Connecting your business to a clients site can also be done via a point to point Ethernet leased line. This can help enhance data transfer and boost transfer reliability between the two sites.

Point to Point Leased Lines may or may not carry the internet. Some businesses use an internal connection to share data between the sites rather than connecting to the internet. You can also get “dark fibre” leased lines which is where there is nothing touching the line from any network – its literally just the Ethernet line itself for your IT team to use.

For businesses that have multiple offices many will have an MPLS network in place which is a way to connect all the sites & allow them to speak to each other in the most efficient way possible.

‘Site-to-network’ is a common type of leased line in the UK. Instead of connecting two dedicated points, it directly connects a business to the network with a 1:1, uncontended leased line. This ensures that all employees on the network are able to work with guaranteed upload and download speeds. These can be specified by the business. It also means peak times or the number of users won’t impact speeds received.

This type of leased line especially is becoming more and more popular in the UK as it facilitates a more modern way of working. Greater upload speeds – which are a common feature of site-to-network leased lines – mean that businesses are able to make the most of VoIP for collaboration and communication, and cloud computing for improved security and data transfer, for example.

These internet line connections use fibre optic cables to deliver their service. Providers often sell Ethernet First Mils Line EFM’s as a standard leased line . They are more restrictive as have a max speed of around 20Mb if you’re lucky. EFM’s are fast becoming a legacy service like many dsl leased lines.

The best way to choose a leased line service is by first understanding your business needs. Talk to the experts by giving us a call on 01923 594060. If you are looking for a reliable internet connection for your business you need a leased line quote. However, if you have multiple sites and need them all connected have a look at network options with an MPLS or WAN.